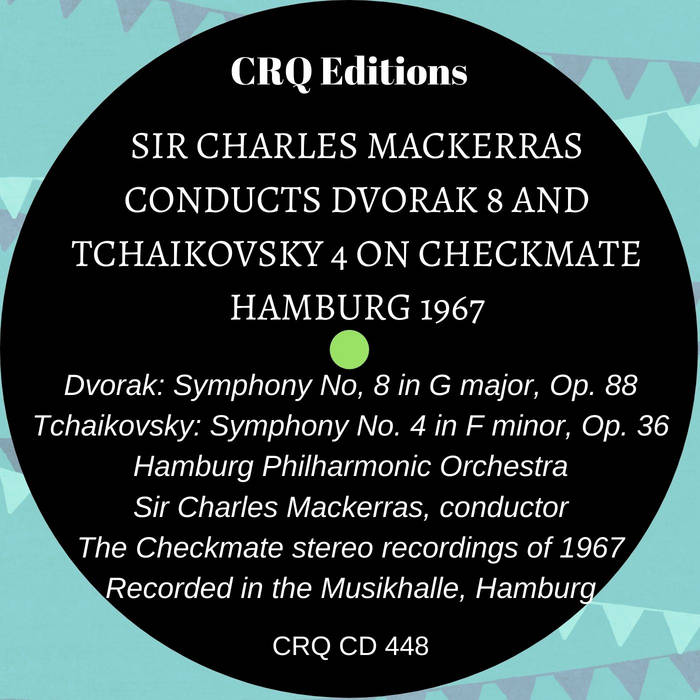 Hamburg Philharmonic Orchestra
Sir Charles Mackerras, conductor
Recorded in 1967 in the Musikhalle Hamburg by Elektra - Nonesuch for release on the Checkmate label
Previously released in 2019 as CRQ CD 390
LP transfer and digitalisation by Jim Bostwick

Checkmate was a short-lived off-shoot of Nonesuch, the budget classical label introduced by Elektra-Nonesuch Records during the mid-1960s. Whereas Nonesuch's recordings were largely drawn from the catalogues of lesser-known European recording labels, with Elektra-Noneusch paying a license fee for their use, the recordings issued on the Checkmate label were financed and recorded by Elektra-Nonesuch directly. They were extremely well engineered to the highest contemporary stereo standards, and featured notable performances. In all a total of only ten LPs were issued on Checkmate. They appear never to have been reissued on compact disc.

The full Checkmate discography is available at:
www.atsf.co.uk/elektra/discography.php?from=6000&to=6010

Sir Charles Mackerras recorded four albums for the label: Brahms 1, Dvorak 8, and Tchaikovsky 4 and 6. These are significant recordings in his discography in that they are early examples of him leading recordings of the mainline symphonic repertoire. Between 1966 and 1969 he held the post of first conductor at the Hamburg State Opera, and so he would have worked closely with the orchestra of that opera house, which gave orchestral concerts under the name of the Hamburg Philharmonic Orchestra, thus explaining the high orchestral standards achieved in the Checkmate recordings.

An extensive biography of Sir Charles Mackerras is available at:
www.naxos.com/person/Charles_Mackerras_30395/30395.htm

If you like CRQ 448 SIR CHARLES MACKERRAS CONDUCTS DVORAK 8 AND TCHAIKOVSKY 4 ON CHECKMATE HAMBURG 1967, you may also like: