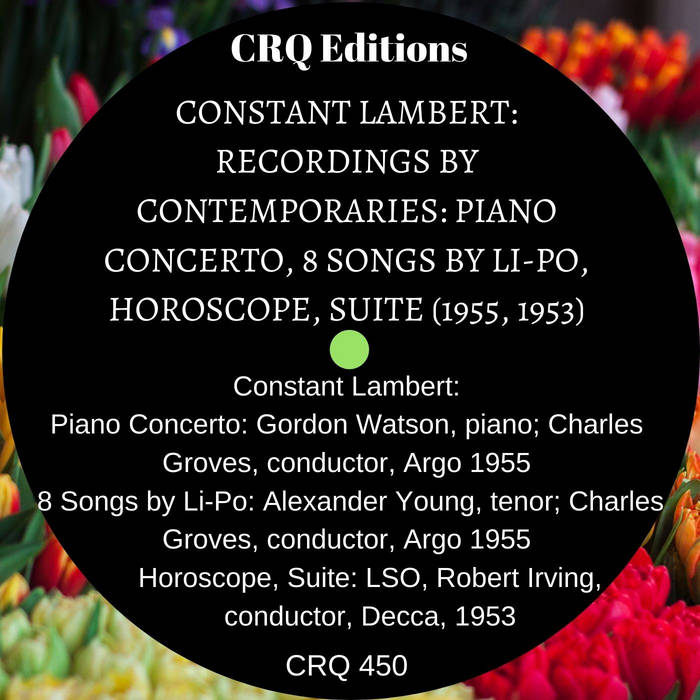 Tracks 1-11: Originally recorded by the Argo Record Company and published in 1955 as Argo RG 50

The distinguished Australian pianist Gordon Watson (1921-1999) enjoyed a successful career in the United Kingdom after the Second World War. He took the important piano part in the first performance of Lambert's 'Tiresias' with Lambert himself conducting in 1951, and broadcast the Lambert Piano Sonata in the same year. He recorded extensively for Argo. He returned to Australia in 1964 to teach at the Sydney Conservatorium of Music.

The tenor Alexander Young (1920-2000) made his debut singing Scaramuccio in Sir Thomas Beecham's production of Ariadne auf Naxos at the Edinburgh Festival in 1948. He enjoyed a busy career in the United Kingdom and abroad until his retirement from the stage in 1973. The variety of the repertoire which he performed was notable. Several of his recordings of English song for Argo featured Gordon Watson at the piano.

Robert Irving (1913-1991) was educated at Winchester College and New College, Oxford, graduating in music. In addition he studied with Malcolm Sargent and Constant Lambert at the Royal College of Music from 1934 to 1936. During the war he served in the RAF and was decorated. After serving as assistant conductor with the BBC Scottish Symphony Orchestra he held the post of music director of the Sadler’s Wells Ballet from 1949 to 1958. He then crossed the Atlantic to become music director of the New York City Ballet, a post he retained until 1989.

Sir Charles Groves (1915-1992) was known for the breadth of his repertoire and for his support for contemporary composers and young conductors. After accompanying positions and conducting various orchestras and studio work for the BBC, Groves spent a decade as conductor of the Bournemouth Symphony Orchestra. In 1963 he became musical director of the Royal Liverpool Philharmonic Orchestra with whom he recorded extensively. From 1967 to his death he was associate conductor of the Royal Philharmonic Orchestra. During his final decade he conducted internationally.

Transfers from the original recordings and digitisation by Jim Bostwick

Further information about the early days of the Argo Record Company may be found at
folkcatalogue.wordpress.com