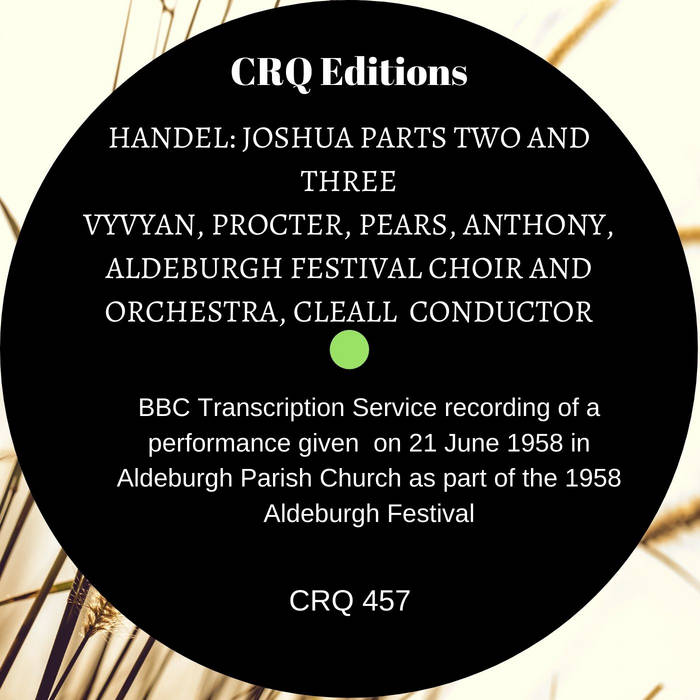 Joshua (HWV 64) is an oratorio by George Frideric Handel. It was composed in a month, between 19 July 1747 and 19 August 1747, six months before the beginning of the oratorio season, and is Handel's fourth oratorio based on a libretto by Thomas Morell. The oratorio premiered on 9 March 1748 at the Covent Garden Theatre, London. Joshua is based on the Biblical story of Joshua as the leader of the ancient Israelites. The story follows the Israelites from their passage over the Jordan River into Caanan and through the Battle of Jericho. The work also includes a love story elaborated from a few hints in the Biblical narrative between Caleb's daughter Achsah and Othniel, a young soldier.
Joshua was the fourth oratorio Handel had written within the span of twenty months. Following the Jacobite rising of 1745 in England, Handel produced a series of English oratorios based on military themes: Occasional Oratorio, Judas Maccabaeus, Alexander Balus, Joshua, and Solomon. The military conquests the Israelites achieve in the oratorio were seen as parallels to the victory of the Hanoverian regime in crushing the Jacobite rebellion. Joshua was one of his shortest oratorios, containing no genuine overture, only a brief orchestral movement simply titled, "Introduction." Joshua also included at least five pieces borrowed from other Handel compositions. Part one was completed on 30 July 1747, Part two on 8 August and Part three on 19 August.
Handel's second-most-famous chorus, "See the Conq'ring Hero Comes" was first penned for Joshua. It was an immensely popular number and Handel soon added it to Judas Maccabaeus, which had premiered the season before. The chorus is more often thought of in connection with Judas because of its relatively greater fame. When a friend said to Handel that in his opinion the composer had written better things than "See the Conq'ring Hero Comes", Handel replied "You will live to see it a greater favourite with the people than my other fine things."

Part Two
Joshua and his army destroy the mighty city of Jericho and then commemorate the Feast of the Passover. The army gets word of the defeat of Israel at Ai and Joshua gathers his men to renew their attacks. Othniel calls upon Achsah, but Caleb, her father, dismisses him, telling him to go join the war in the defense of Israel's allies. Miraculously, the sun and moon stay their courses, allowing the Israelites to continue fighting until they arise victorious.

Part Three
With the fighting over, Joshua is again lauded as a great leader. He then gives Caleb the land which had been promised to him by Moses. Caleb pledges his daughter's hand to whoever can conquer the city of Debir. Othniel rises to the occasion and asks God to guide him to success. He returns triumphant and Achsah praises God protecting her beloved. The people raise their thanksgivings to God for their prosperity and deliverance.
(From wikipedia)

If you like CRQ 457 Handel Joshua Parts Two and Three Aldeburgh 1958 Vyvyan, Procter, Pears, Anthony, Aldeburgh Festival Chorus and Orchestra, Cleall conductor, you may also like: