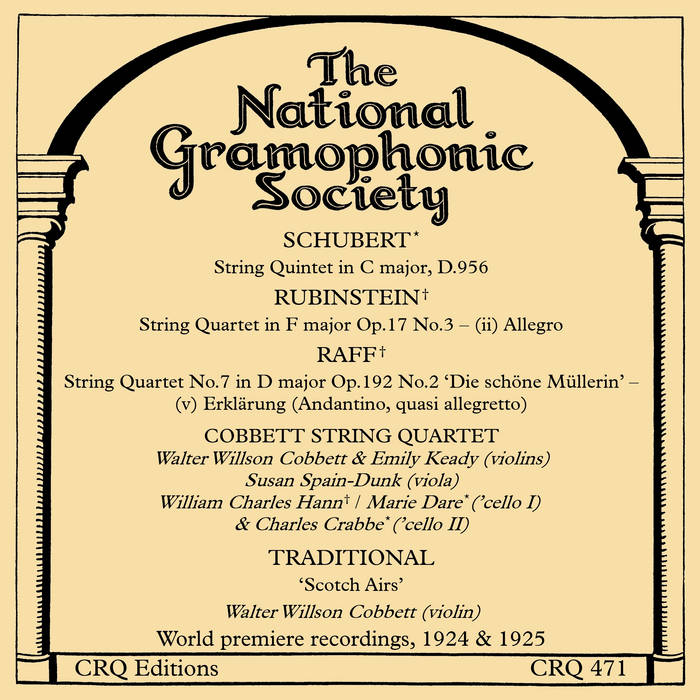 Walter Willson Cobbett (1847-1937)
British businessman Walter Willson Cobbett made his fortune as a manufacturer of machine belts, which powered the factories of the Industrial Revolution. But his true vocation was chamber music: he played it himself as an amateur, and supported and promoted it as a patron of composers, performers and instrument-makers (the Cobbett Medal is still awarded annually for ‘services to Chamber Music’). In old age Cobbett devoted a final effort to compiling a Cyclopedic Survey of Chamber Music, published in two volumes in 1929. Looking back over 60 years of his own service to the art, Cobbett reckoned he had spent an average of 2 hours a day playing or practising the violin and viola, and studying or performing chamber music. He had a voracious appetite for fresh repertoire, playing it through with friends, and confessing that ‘sight-reading is one of the most delightful experiences of the chamber music life’. Remarkably, Cobbett’s private passion was preserved on record, capturing the character and sound of high-minded Victorian and Edwardian domestic music-making.

The National Gramophonic Society (1924-1935)
The NGS was an offshoot of The Gramophone, the magazine launched in 1923 by the British novelist Compton Mackenzie (see CRQ 447, 451 & 458). Among several innovations, the Society was funded by subscription; members voted on which works it would record; and it pledged to issue only premiere, complete recordings. An enthusiast of chamber music, Mackenzie admired Cobbett’s devotion to the art, and hoped to secure his patronage for the NGS. He was not so taken with Cobbett’s proposal to record for the Society himself but relented, and two isolated quartet movements, set down as ‘tests’ by Cobbett’s private quartet, were issued as a present to members. (The group, incidentally, included two women now better remembered as composers, Susan Spain-Dunk and Marie Dare.) Some months later, Cobbett did pay for the NGS’s most substantial chamber music project, the premiere recording of Schubert’s great String Quintet in C major. This instalment in CRQ’s NGS series, remastered by Jolyon Hudson with notes by Nick Morgan, closes with a rarity, a private disc made by Cobbett as solo violinist, with an unidentified pianist, playing a pot-pourri of Scottish tunes possibly penned by Cobbett himself. It was probably recorded around the same time as the two quartet movements and, like them, harks back in taste and tone to the nineteenth century.