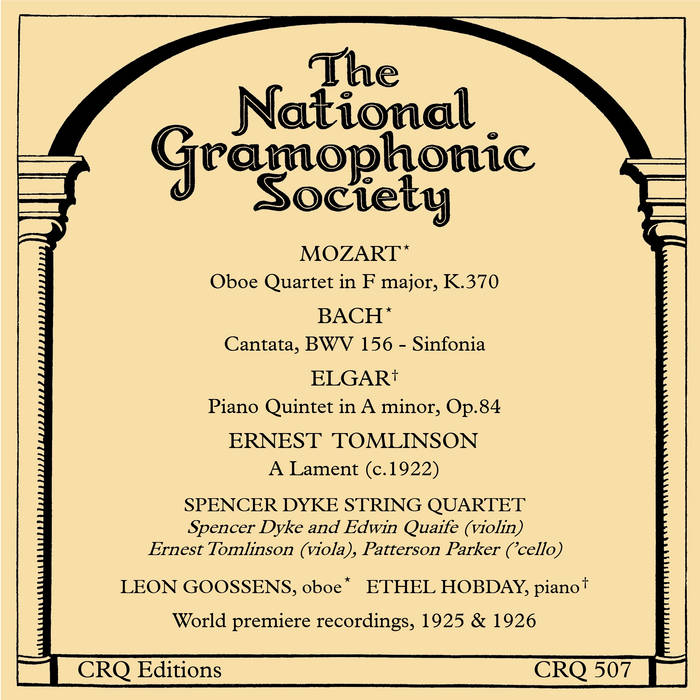 Leon Goossens (1897-1988)
Scion of a famous musical family, Goossens enjoyed a long career as the leading oboist of his time. He was a great catch for the National Gramophonic Society, starring in some of its most popular and successful issues. The first, Mozart’s Oboe Quartet, was well suited to acoustical horn recording, deployed here by Parlophone’s Oscar Preuss (1889-1958), who many years later gave George Martin his start in the record business. Equally successful was the opening Sinfonia of Bach’s cantata No.156, played one to a part by Goossens and members of the Spencer Dyke Quartet, sparely and expressively.

Ethel Hobday (1871-1947)
The National Gramophonic Society was an offshoot of The Gramophone, the magazine launched in 1923 by the British novelist Compton Mackenzie (see CRQ 447, 451, 458 & 471). Among several innovations, the Society was funded by subscription; members voted on which works it would record; and it pledged to issue only premiere, complete recordings. The NGS also aimed for musical authenticity by involving composers in its recordings of their works. Mackenzie belonged to the same London men’s club as Sir Edward Elgar, and invited the composer to play the piano part in his Piano Quintet. Elgar declined but in his place nominated two female pianists. The obvious choice was Ethel Hobday, who had already made many chamber music recordings for Vocalion. Announcing its set of Elgar’s Quintet, the NGS proudly proclaimed, ‘This issue may therefore be taken as an authoritative rendering’. Some months before, the Society’s resident quartet had recorded the short but impassioned Lament by its viola player, Ernest Tomlinson (1877-1957), well known in his day as a teacher. As far as is known, this is his only composition to appear on disc.