by A 1950s Christmas on LP: Bach, Handel and Dickens 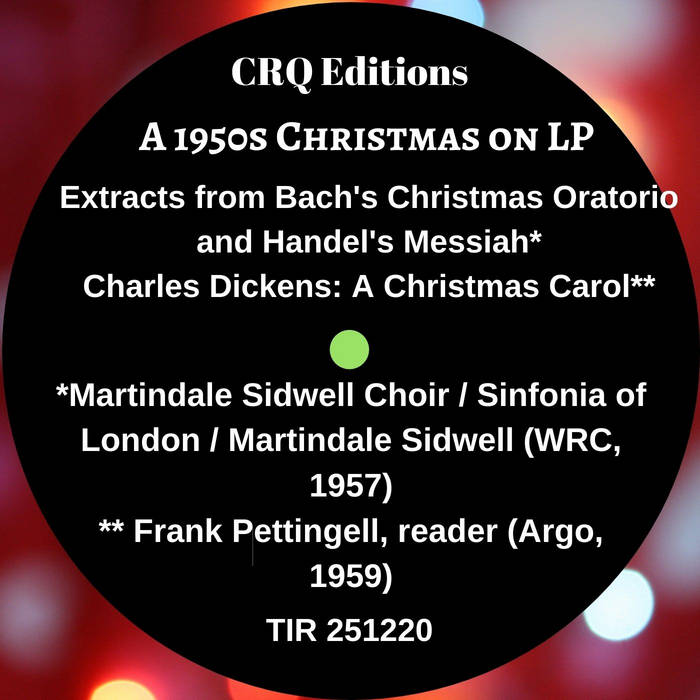 ‘A 1950s Christmas on LP ’ presents recordings from two long-playing (LP) records of the late 1950s, the era of the Sputnik, the Cuban revolution and the Twist.

The major item is an hour long abridgement of Charles Dicken’s ‘A Christmas Carol’. The reader Frank Pettingell (1891-1966) enjoyed a busy life in the United Kingdom as a stage actor from 1910 onwards. He was well known for his interest in Victorian popular culture. Pettingell’s rich style of performance can also be fully appreciated in his portrayal of the retired detective Rough in Thorold Dickinson’s masterly film of Patrick Hamilton’s play ‘Gaslight’ (1940). (An excellent print of this superb film - which also makes excellent Christmas viewing - is available to watch for free on youtube at www.youtube.com/watch?v=UYmtzaHwCKo&t=114s).

This recording was originally produced by the American organisation Spoken Arts, founded in 1956 by Arthur and Luce Klein. Spoken Arts was one of the first American companies to devote itself to recordings of the spoken word, which the Argo Record Company had been producing since 1952. ‘A Christmas Carol’ was released in the UK by Argo in 1959. Founded by Harley Usill in 1951, Argo gradually moved from its initial intention of recording ‘British music played by British musicians’ to include within its eclectic catalogue recordings of the spoken word, steam trains, jazz, folk and world music. It was bought by Decca Records in 1957, but Usill remained in charge and continued to run the company autonomously until 1979, when he left Decca to set up another record company, ASV.

The musical items come from the LP ‘On Christmas Night’, released in 1957. This was an early production of the World Record Club, which used on this occasion the rarely seen label name Fine Recordings Club. This recording is of interest for showcasing the conducting of Martindale Sidwell (1916-1998), director of music at Hampstead Parish Church for many years. His brisk style of conducting anticipated historically informed practice of the 1970s and later. Certainly in business in 1956, the World Record Club had at least 150,000 members by 1958, which gives an idea of the extensive reach of cut-price mail order record clubs at this time. Its principal rival was the Classics Club, whose fascinating story is told in detail in ‘Classics Club / Saga, 1956-1986, a discographical adventure’ by Philip Stuart, which is available as a free download at crqeditions.co.uk