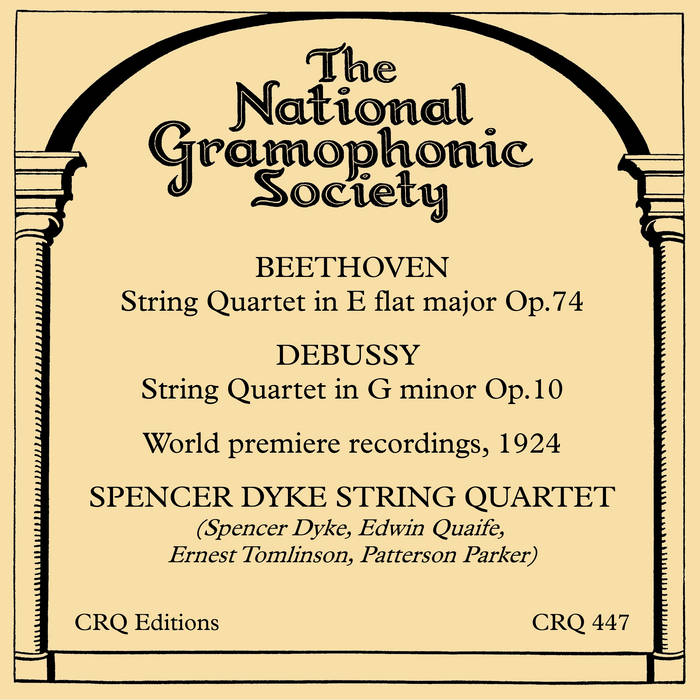 from CRQ 447 National Gramophonic Society: First Recordings: Beethoven, Debussy: Spencer Dyke String Quartet: 1924, released January 25, 2021
The Spencer Dyke String Quartet (1918-1946)
Edwin Spencer Dyke had already played second fiddle in his teacher’s quartet for many years when he took it over after World War I, and he proudly thought of it as carrying on the tradition of Brahms’s friend the violinist Joseph Joachim. Right from its debut the Spencer Dyke Quartet enjoyed critical success, playing all over Britain. It performed with well-known soloists, and supported modern music and British composers. In 1924, the Quartet started broadcasting for the B.B.C. and making records, first for the Vocalion label and then for the National Gramophonic Society, until 1927. That year the personnel began to change, until only Spencer Dyke himself remained. From the mid-1930s his Quartet gave fewer concerts, and it made its last broadcast in 1944, disbanding two years later on his death. Its recordings capture a playing style poised between the old-fashioned Germanic manner of Joachim and the modern expressiveness of quartets such as the Busch and Léner.

The National Gramophonic Society (1924-1935)
The NGS was an offshoot of The Gramophone, the magazine launched in 1923 by the British novelist Compton Mackenzie. A recent convert to recordings, Mackenzie was dismayed to find little of the music he loved on disc, so he started his own label. Among several innovations, it was funded by subscription, its members chose the works to be recorded by vote, and it pledged to issue only premiere, complete recordings. These were mainly of chamber music, Mackenzie’s favourite genre and relatively easy and cheap to record, but the NGS also branched out into orchestral music, giving John Barbirolli his first sessions as conductor. Now largely forgotten, its pioneering productions have been newly transferred for CRQ Editions by Jolyon Hudson, with notes by Nick Morgan (see NGS discography).