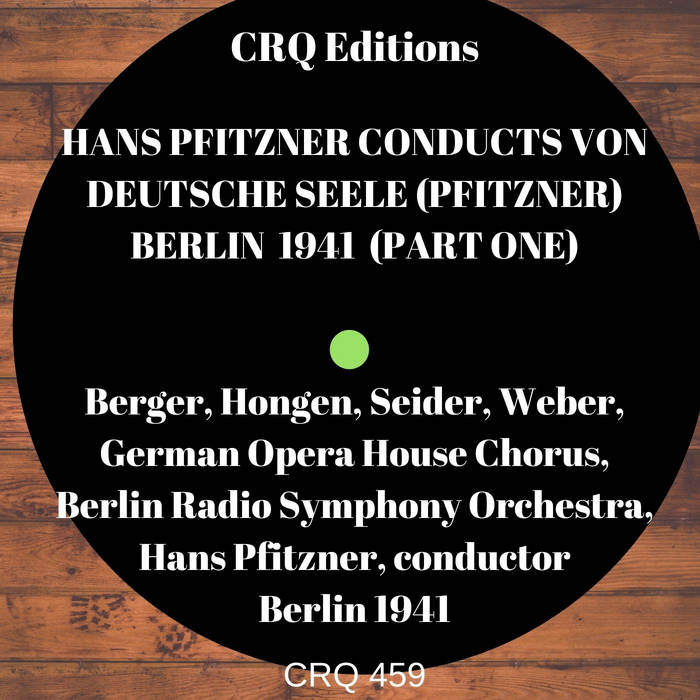 from CRQ 459 PFITZNER CONDUCTS VON DEUTSCHE SEELE (PFITZNER) BERLIN 1941 PART ONE, released May 17, 2021
Pfitzner composed his cantata Von Deutsche Seele in 1921 as a reaction to the First World War. The first performance took place on 27 January 1922 in Berlin, with Selmar Meyrowitz conducting. The four soloists were Berta Kiurina (soprano), Maria Olszewska (mezzo), Albert Fischer (baritone), and Fritz Krauss (tenor).
Pfitzner's friend and biographer Walter Abendroth wrote about the work: “The whole, complete Pfitzner is contained in this work: the popular and the lonely-spiritual, the child-like and the philosophical, the worldly (albeit always inward) and the otherworldly, the most serious and the playful, the brooding and the humorous, the amiable and the overwhelmingly great, the fantastic and the demonic; the lieder singer and the symphonic composer, the romantic, lively melodist and the strict Gothic counterpoint, the master of the horizontal and vertical movement, the harmoniist who ventures far into uncharted territory, the thrifty and extravagant instrumentator, the musician of drawing and colour.’
Von Deutsche Seele quickly found its way into concert halls and also enjoyed international success. Artur Bodanzky conducted its American premiere in October 1923 in New York. In comparison with most of Pfitzner's other works, it has been performed quite frequently in recent times.

CRQ 459 and CRQ 460 - Pfitzner: Von Deutsche Seele Parts One and Two conducted by Pfitzner - are each priced at £4 to allow the set to be purchased for the same price as a single download: £8.

If you like CRQ 459 PFITZNER CONDUCTS VON DEUTSCHE SEELE (PFITZNER) BERLIN 1941 PART ONE, you may also like: