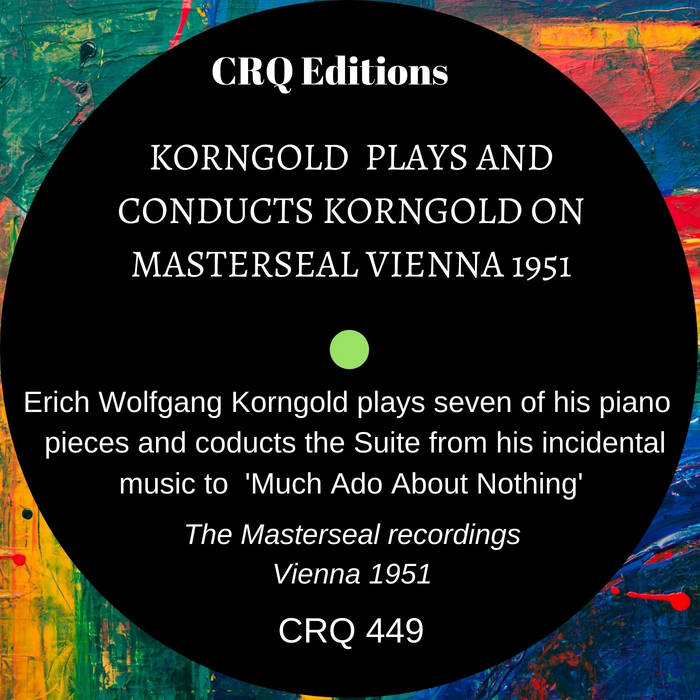 It was the atmosphere of Bruges, 'dead city' in G. Rodenbach's novel "Bruges, la morte", which inspired my third opera, 'The Dead City', Op. 12. I worked on it from 1916 until 1920. when it was presented at the Operas of Hamburg, Cologne and Vienna. Maria Jeritza's unforgettable creation of the female lead was enthusiastically applauded at the Vienna Opera and the Metropolitan. Eighty theatres followed. We are in Bruges, at the end of the eighteenth century. Paul's wife. Marie, has died. Since her death, Paul has lived only in the past - he calls his home 'An Altar to the Past'. There are Marie's portrait and long locks of her blond hair. One day Paul meets a young dancer who impresses him as a living image of Marie. He invites her to his house, drapes his wife's scarf about her. Marietta takes Marie's lute and sings her song: 'Glueck, das mir verblieb ....' It was Marie's favourite - in a trance. Paul joins in. To him, for the duration of a short and feverish adventure, Marietta has become Marie....The improvisation is based on the main theme of the dead city, followed by a song in which Pierrot, member of Marietta's dance group, expresses his home-sickness for the Rhine. E. K. W.

from CRQ 449 KORNGOLD PLAYS AND CONDUCTS KORNGOLD ON MASTERSEAL VIENNA 1951, released February 23, 2021
In 1952 the American record label Masterseal, initially a high-end subsidiary of Don Gabor's Remington label, published a long playing record of Erich Wolfgang Korngold playing a selection of his compositions on the piano and conducting the Austria State Symphony Orchestra (possibly either the Austrian Radio Symphony Orchestra or the Vienna Tonkunstler Orchestra) in the Suite from his incidental music to Shakeseare's play 'Much Ado About Nothing. These recording sessions probably took place in 1951 and were arranged by Dr. Marcel Prawy (1911-2003) who had close links with Gabor, and was a major figure in Austrian musical life throughout his career. The original LP contained notes on each selection by the composer and these are included here on the relevant tracks, which have been rearranged to bring together all the piano pieces and orchestral pieces in consecutive order. The original LP also contained a recording of the duet from Die Tote Stadt sung by Hilde Zadek, soprano, and Anton Dermota, tenor, with the Austria State Symphony Orchestra conducted by Wilhelm Loibner, which is also included here as an appendix. The original Masterseal LP was reissued as a Varese Sarabande LP in the early 1980s. Further information about Marcel Prawy and the Masterseal label may be found at:
www.soundfountain.org/rem/remprawy.html