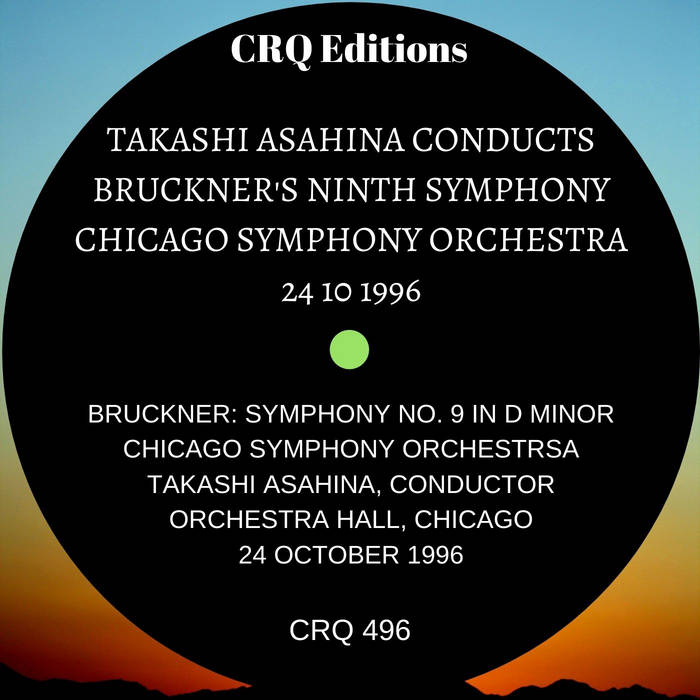 
A long and at times technical note on Bruckner's Ninth Symphony may be found at:
en.wikipedia.org/wiki/Symphony_No._9_(Bruckner)

For some, Takashi Asahina was "the Karajan of Japan"; for others, his eminence was derived at least in part from his being the oldest conductor on the international scene – he was active way past his 93rd birthday; for others yet, he was quite simply an excellent musician, with a special sympathy for the classics of the Austro-German repertoire – Bruckner, Beethoven, Mahler and Brahms in particular.
Born in Tokyo, Asahina taught himself the violin at school and played in the student orchestra at the Kyoto University Law School. His family insisted on a legal career and he stuck with it for as long as he could: upon graduation in 1931, he joined an Osaka law firm but, failing the exams, worked as a sales clerk in a department store and for the Kankyu railway company – one of his favourite jokes was that he was probably the world's only conductor to have operated a train.
He launched his career on the podium in 1936, although he had had no earlier training. But he demonstrated the thoroughness of his preparation when, apprenticed to an older conductor, he was asked to copy out the entire second-violin part of Beethoven's Seventh Symphony. He made one omission.
His breakthrough came in 1940, when he conducted the New Symphonic Orchestra (now the NHK Symphony Orchestra). During the Second World War he courted later controversy when, on the Japanese-occupied Chinese mainland, he conducted the Shanghai and Harbin Symphony Orchestras – which then, flushed with musician refugees from turmoil in Europe and Russia, enjoyed a truly international character.
Asahina returned to Japan in 1946 and within a year, despite the straitened post-war conditions, he had set up the Kansai Symphony Orchestra, which is now the Osaka Philharmonic, and remained its musical director until the end of his days. His pioneering work in introducing Western classical music to Japanese audiences deserves a good part of the credit for establishing one of its most enthusiastic and buoyant markets.
His international career took off in 1956, when he conducted the Berlin Philharmonic – the orchestra whose interpretations of the Austro-German classics had been shaped by decades of Wilhelm Furtwängler's spiritually intense readings. Asahina had met Furtwängler in the early 1950s, sitting at his feet while Furtwängler communicated his views on conducting Bruckner. And Bruckner became one of Asahina's specialities: he recorded the symphonies several times – usually on Japanese labels, with limited penetration of Western markets – gaining a reputation as a musical architect of the first order.
Although he was the most recorded of all Japanese musicians, with multiple versions (most of them taken "live") of the Beethoven and Bruckner symphonies to his name, and a 10-year relationship with the North German Radio Symphony Orchestra commemorated in a rapturously received set of CDs, he made little impact in the United States until 1996 – some 20 years after his only previous US appearance, in Honolulu. Henry Fogel, President of the Chicago Symphony Orchestra, had come across him in Japan, more or less by accident:
‘I first saw him conduct the Alpine Symphony of Strauss in 1991, having never heard of him and having no idea what he was like. I went out of respect for my hosts (I was a judge in a conducting competition), and when I saw this elderly man walking out to the podium my expectations were low. The performance was, from the outset, remarkable, and within five minutes I was convinced that I was watching (and hearing) a major conductor. Though the tempi were slow, he managed to get his orchestra to sustain the line over long phrases. Bar lines disappeared – he conducted in paragraphs, not sentences. His sonority was built from the bottom up, founded on the basses and cellos, and also built around a rich string sound. Although the music had force and power, it was never angular, never overly aggressive. It always had beauty, an inner beauty and even spirituality.’
The next day, Fogel went to a Tokyo record store, asked about Asahina recordings, and came away with a Bruckner cycle, a Beethoven cycle, a Brahms cycle, and the Furtwängler Second Symphony:
‘I took those back home, and listened, and found myself admiring the same qualities in virtually all of these performances. In 1994 I saw him conduct again, in Tokyo – this time Bruckner 8. It was magnificent, and based on that performance I invited him to conduct the Chicago Symphony, where he did a wonderful Bruckner Fifth in 1996.’
That initial engagement required Asahina to direct the same programme three times. One Thursday-night subscriber, turning up again to queue for the Saturday-evening concert, confessed that he hadn't done that since Bruno Walter last conducted in Chicago – almost four decades earlier. Those concerts, and three more the following season, confirmed Asahina's standing as a cult figure, and his international reputation as he moved into his nineties was higher than at any earlier point in his life.
Asahina had been scheduled to conduct Beethoven's Ninth Symphony – a work he did over 250 times – at the Osaka Philharmonic's end-of-year concerts, a tradition he had founded. But, after conducting the Tchaikovsky First Piano Concerto (Tchaikovsky was another Asahina trump card) in Nagoya on 24 October, he had complained of feeling unwell and was admitted to hospital; he remained there until his death. He had intended to carry on working until he was 95 – and missed his target by less than two years.
Martin Anderson

If you like CRQ 496 TAKASHI ASAHINA CONDUCTS BRUCKNER'S NINTH SYMPHONY CHICAGO SYMPHONY ORCHESTRA 24 10 1996, you may also like: