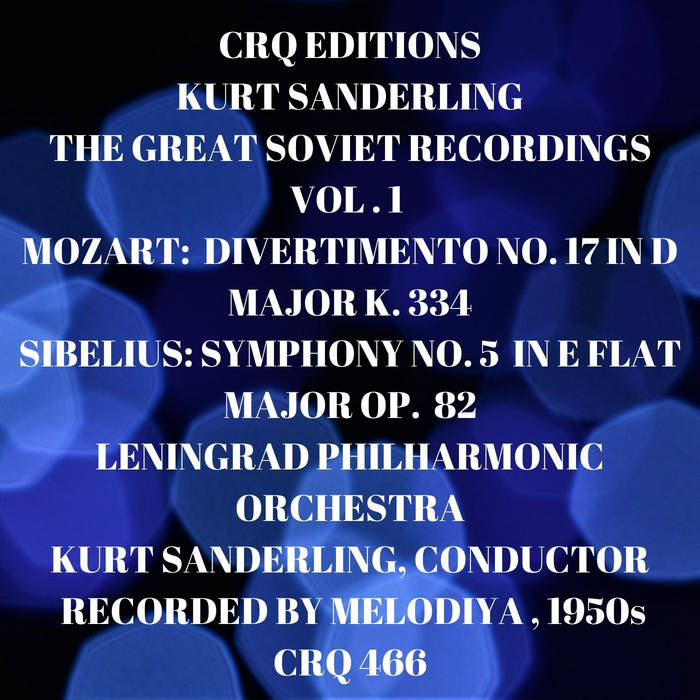 Having studied initially in Königsberg, the capital city of East Prussia (now called Kaliningrad, and located in Russia) and in Berlin, Sanderling was engaged as a répétiteur in 1931 by the Berlin Städtische Opera, where he assisted Fritz Stiedry and Paul Breisach. However, with the assumption of power by the National Socialist regime in 1933 he was compelled to give up this position, working subsequently with the Berlin Jewish Cultural Federation and leaving Germany as a refugee in 1936. Unusually for a musician, instead of heading west, Sanderling travelled to the east, where he had relatives. He secured a post as assistant to George Sebastian with the Moscow Radio Orchestra and made his conducting debut with the orchestra in 1937. He left Moscow in 1939 to become chief conductor with the Kharkov Philharmonic Orchestra, a position which he retained for three years.
Having made a guest appearance with Evgeny Mravinsky’s Leningrad Philharmonic Orchestra in 1941, Sanderling was invited to become this orchestra’s second conductor at a time when it had been evacuated to Novosibirsk, Siberia, a situation conducive to his forming a close relationship with his musical colleagues. The orchestra returned to Leningrad in 1944 and Sanderling and Mravinsky shared the principal conducting duties (with Mravinsky in charge) until 1960; during this period Sanderling also taught conducting at the Leningrad Conservatory. In 1960 the Communist authorities invited him to return to East Berlin to become chief conductor of the Berlin Symphony Orchestra, with the intention of making this orchestra a rival to the Berlin Philharmonic, then under the direction of Herbert von Karajan. This objective Sanderling to a large extent achieved, making numerous recordings for the East German record company VEB with both the Berlin Symphony and with the Dresden Staatskapelle, of which he was chief conductor from 1964 to 1967.
During the 1960s Sanderling also began to appear abroad, making successful appearances at the festivals of Prague, Salzburg, Vienna and Warsaw. He made his debut in the United Kingdom with the Leipzig Gewandhaus Orchestra in 1970 and in 1972 substituted for Otto Klemperer with the New Philharmonia Orchestra, with whom he developed a close relationship. He recorded a complete cycle of the Beethoven symphonies with this orchestra in 1981 and was made an honorary member in 1996, the only previous recipient of this award being Klemperer. He conducted the Yomiuri Nippon Symphony Orchestra for the first time in 1976 in a sequence of outstanding performances which led to subsequent appearances with the orchestra in 1978, 1980 and 1990. Following the collapse of the Communist regime, during the 1990s Sanderling enjoyed a distinguished international career, giving notable performances with many leading orchestras, including the Royal Amsterdam Concertgebouw and Los Angeles Philharmonic. In 2002, the year of his ninetieth birthday, he decided to cease conducting. He died in 2011 immediately before his ninety-ninth birthday.
Sanderling was a true representative of the Austro-German style of conducting, and at the same time, because of his extensive experience in Soviet Russia, an authoritative interpreter of twentieth century composers such as Shostakovich. His podium manner was undemonstrative, with an expansive but always clear baton technique. In rehearsal however he was highly dynamic.
Sanderling’s recorded repertoire is very wide indeed, and includes complete cycles of the symphonies of Brahms and Sibelius, both of which are outstanding. His recordings of the music of Bruckner and Mahler are equally notable. His recordings of Shostakovich, especially of Symphonies Nos 5, 8, 10 and 15, and of Rachmaninov’s Symphony No. 1, with the Leningrad Philharmonic, may be considered authoritative; while his accounts of the final three Tchaikovsky symphonies are extremely powerful, in a more Teutonic sense. By contrast his interpretations of Haydn’s six ‘Paris’ symphonies are full of wit and elegance. Sanderling was also a most distinguished accompanist, recording with such leading instrumentalists of the Soviet Union as Emil Gilels and David Oistrakh. His account of Rachmaninov’s Piano Concerto No. 2 with the Russian pianist Sviatoslav Richter is deeply poetic.

CRQ 466 and 467 – Kurt Sanderling: the Great Soviet Recordings Vols 1 and 2 – are each priced at £4 to allow the set to be purchased for the same price as a single download CD: £8.

If you like CRQ 466 KURT SANDERLING: THE GREAT SOVIET RECORDINGS VOL. 1 MOZART SIBELIUS, you may also like: