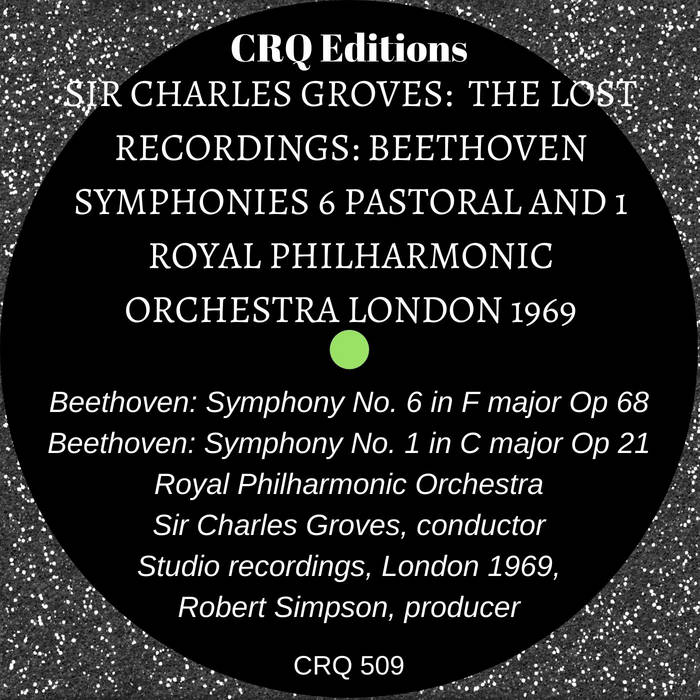 A biography of Sir Charles Groves may be accessed at:
https://en.wikipedia.org/wiki/Charles_Groves

from CRQ 509 SIR CHARLES GROVES: THE LOST RECORDINGS: BEETHOVEN SYMPHONIES 6 PASTORAL AND 1 ROYAL PHILHARMONIC ORCHESTRA LONDON 1968, released April 4, 2022
In April 1969 the partwork ‘The Great Musicians’ was launched in the United Kingdom by Fabbri and Partners. Fabbri was an outcrop of the Italian publisher Fratelli Fabbri which had already enjoyed enormous success in Italy with similar projects, achieving sales in excess of a billion and a half units. In England Fabbri had already enjoyed success with a weekly partwork devoted to major painters. The premise of ‘The Great Musicians’ was simple - a lavishly illustrated twelve page book discussing the life and times of a major composer, accompanied by a ten-inch long-playing record of music by the same composer. The number of books devoted to a particular composer varied according to their perceived importance. Figures given in the leaflet accompanying each book suggested an individual print run in the region of 50,000 per book, and these were released weekly for a total of eighty-four weeks across the whole UK network of newspaper shops, and especially the large chain W H Smith. The essays within each book were written by acknowledged experts of the time, for instance Beethoven was covered by the eminent musicologist, writer and composer Robert Simpson. Priced initially at thirteen shillings and eleven pence, or about sixty-five pence in today’s money, ‘The Great Composers’ represented good value for money, and an easy way to get to know the pillars of the classical music repertoire

The recordings used for the series’ long-playing records were in general sourced from the Vox catalogue, supplemented by recordings from Italy and elsewhere, and possibly from previous Fabbri projects. To launch the series however Fabbri engaged Sir Charles Groves and the Royal Philharmonic Orchestra to record afresh Beethoven’s Symphony No. 6 ‘Pastoral’ (Issue No. 1) and Symphony No. 1 (issue No. 2). These fine stereo recordings were produced by Robert Simpson and a photo from the recording sessions of Simpson and Groves in conversation accompanied the first issue. These recordings show Groves at his absolute ‘no-nonsense’ best, with vigorous and insightful interpretations. The Royal Philharmonic Orchestra play exceptionally well, and the recorded sound is clear and honest.

Fabbri seem to have commissioned only one other new recording for their UK music series,which was the Tchaikovsky Violin Concerto, played by the British violinist Ralph Holmes, accompanied by the Nuremberg Symphony Orchestra conducted by Othma Maga. This again was a very accomplished production, and a rare example of this fine British musician in main-stream repertoire.

The success of ‘The Great Musicians’ is attested to today by the frequent appearance of individual books from the series in thrift shops up and down the country, and in several hundred e-bay listings. Several classical music partworks followed in the United Kingdom at decent intervals of several years, and in different formats – cassette and compact disc as well as LP - but none captured the excitement of the first encounter with this pioneering series, in which Beethoven, Sir Charles Groves and the Royal Philharmonic Orchestra all played a significant part.

If you like CRQ 509 SIR CHARLES GROVES: THE LOST RECORDINGS: BEETHOVEN SYMPHONIES 6 PASTORAL AND 1 ROYAL PHILHARMONIC ORCHESTRA LONDON 1968, you may also like: