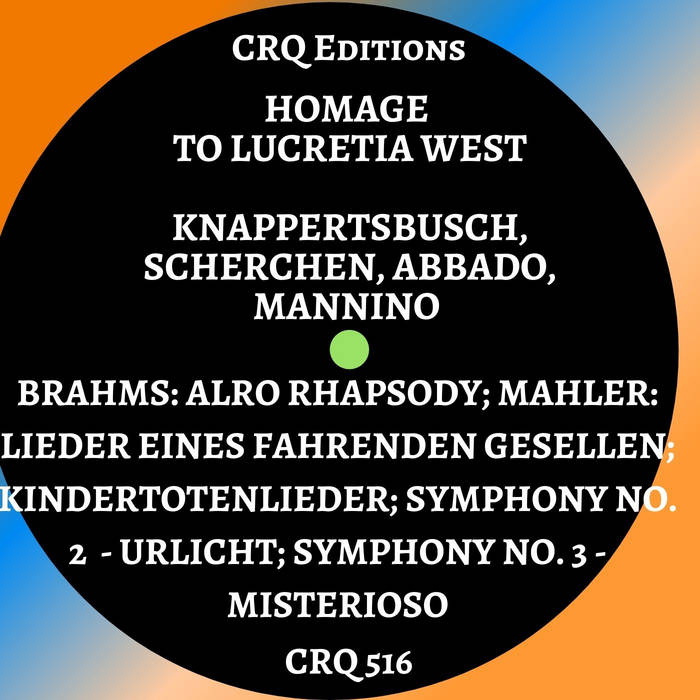 Track 11: Mahler: Symphony No. 2 in C minor 'Resurrection' Movt 4: Urlicht (from Das Knaben Wunderhorn)
Vienna Philharmonic Orchestra, Claudio Abbado, conductor
Recording of a broadcast of the performance given at the Grosse Festspielhaus, Salzburg, on 14 August 1965, as part of the Salzburg Festival

Track 12: Mahler Symphony No. 3 in D minor Movt 4: Sehr langsam—Misterioso
Orchestra of the Academy of Santa Cecilia, Rome, Franco Mannino, conductor
Recorded circa 1970-1971 as part of the soundtrack for the film 'Death in Venice'

To anyone seeking to buy long-playing records of the music of Mahler in the early 1960s, the name of Lucretia West was significant, if little was known about her. West featured as the memorable contralto soloist in Hermann Scherchen’s ground-breaking account of Mahler’s Second Symphony, ‘Resurrection’, recorded by Westminster, which was widely available in the United Kingdom through the World Record Club. She also recorded for Westminster and Scherchen the two major Mahler song-cycles but these recordings were never formally released in the UK. In addition she participated in Scherchen’s second recording of the Mozart Requiem, and recorded recitals of spirituals and songs by Schubert, all for Westminster.

Another Mahler recording of note in which West took part was Dmitri Mitropoulos’s astounding account of the Eighth Symphony given at the Salzburg Festival in 1960. This circulated initially on a pair of US-produced Everest LPs, which again were not formally released in the UK. Apart from all these recordings there was a well-circulated account of the Alto Rhapsody of Brahms under Hans Knappertsbusch for Decca and a recording of Negro Spirituals, recorded by the Club Français du Disque and released in the UK on the obscure Record Society Label. And that was about it.

Fast forward to the late nineteen nineties and early two thousands, characterised by the growth of CD releases of live performances, and it became clear that Lucretia West was the ‘go-to’ soloist for the alto parts in Mahler’s music in the nineteen fifties, sixties and seventies. Recordings appeared of her singing both Mahler and the music of other composers with Carl Schuricht, Jascha Horenstein, Claudio Abbado and Sir John Barbirolli, as well as more with Mitropoulos and Knappertsbusch. Her pre-eminence in the music of Mahler in particular was confirmed when she featured on the soundtrack of Luchino Visconti’s film ‘Death in Venice’ of 1971, in which she sang the ‘Misterioso’ movement from the Third Symphony of Mahler, with Franco Mannino conducting the Orchestra of the Accademia di Santa Cecilia, Rome, a reading of extraordinary depth and feeling.

Remarkably Lucretia West died only recently, on February 21, 2022. This release brings together a selection of her recordings, in homage to her remarkable art as a singer. A full obituary of her may be found at:
www.legacy.com/us/obituaries/timesdispatch/name/lucretia-west-obituary?id=33500092