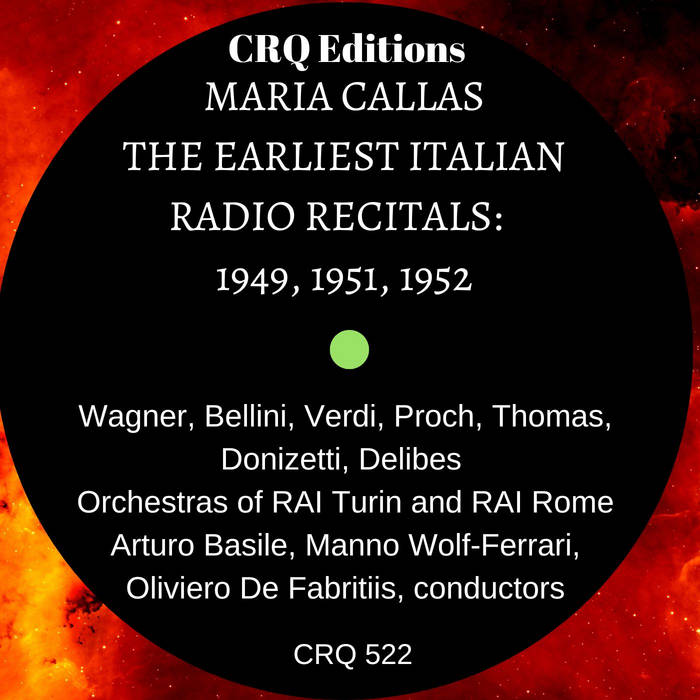 The recordings of the three operatic recitals sung by Maria Callas for Italian Radio between 1949 and 1952 require detailed explanation. Callas’s first recital was in fact broadcast in March 1949, prior to the first known recordings of her, which were taken from performances given in Buenos Aires during the summer of that year. Cetra, the commercial recording arm of Italian Radio, then recorded three of the items from Callas’s March recital with the same accompanying forces in November 1949. The item from the radio recital omitted from Cetra’s recording schedule was ‘O patria mia’ from Aida, originally programmed to be performed between the Wagner and Bellini items. The order in which the recorded items are presented here, as well as with the other two recitals, seeks to reflect the order in which they were given in the March recital, apart from the Verdi item. Callas’s pattern in these radio recitals was to perform two dramatic arias paired with two florid arias. The aim here was to demonstrate her extraordinary ability to fuse power with agility, hence Wagner and Bellini.

The second radio recital of March 1951 appears not to have been formally recorded by Italian Radio. Thus recordings of this broadcast have come down to contemporary listeners through a variety of sources, which helps to explain the difference in recording quality and completeness. The item from this recital not preserved in any recorded form was a performance of the aria ‘Leise, leise’ from Weber’s ‘Der Freischütz’. The third recital, given during February 1952, has been preserved in tolerable sound, and in addition the previously missing fourth item, in this case the aria from Delibes’s ‘Lakmé’, has surfaced and is included in this programme.

The importance of these recitals in chronicling the early days of Callas’s career cannot be over-estimated. Here we hear the full force of her extraordinary abilities as an operatic singer. The American critic John Ardoin has analysed Callas’s recordings in depth, and in his book ‘The Callas Legacy’ (Duckworth, second revised edition 1982) makes the following points:
• Recital 1: Wagner: Tristan: Callas’s deep use of legato throughout is the predominant vocal feature, with Wagner’s long, stretching lines coated in dark tone….The final impression is of one gigantic phrase embracing the music in a feeling of earthiness.
• Recital 1: Bellini: Puritani: There are few examples in singing where so absolute a command of voice is wedded with such equality to such agility and justness of dramatic statement.
• Recital 2: Proch: Variations: Callas tosses off its high-lying difficulties, trills, scales, staccati, and arpeggios with extraordinary freedom and abandon while maintaining a musical shape to the whole not heard in other recordings of this music.
• Recital 3: Programme: This concert…is of prime importance not only for the extraordinary singing during its course, but because it contains Callas’s first thoughts on ‘Macbeth’ and ‘Lucia de Lammermoor’.
• Recital 3: Donizetti: The Lucia excerpt…is prodigious in its finish and understanding. The wonder of her performance is increased when one remembers that she had yet to sing the part in stage.
• Recital 3: Programme: Callas’s voice has frequently been criticized as not one, but many. I would say admiringly that she had at least a dozen, or rather the ability to retool her sound to fit the character she was enacting at the moment. A striking example of this comes next, as she sets aside the dazed, maiden voice of Lucia for the stentorian, warrior sounds of Abigaille.