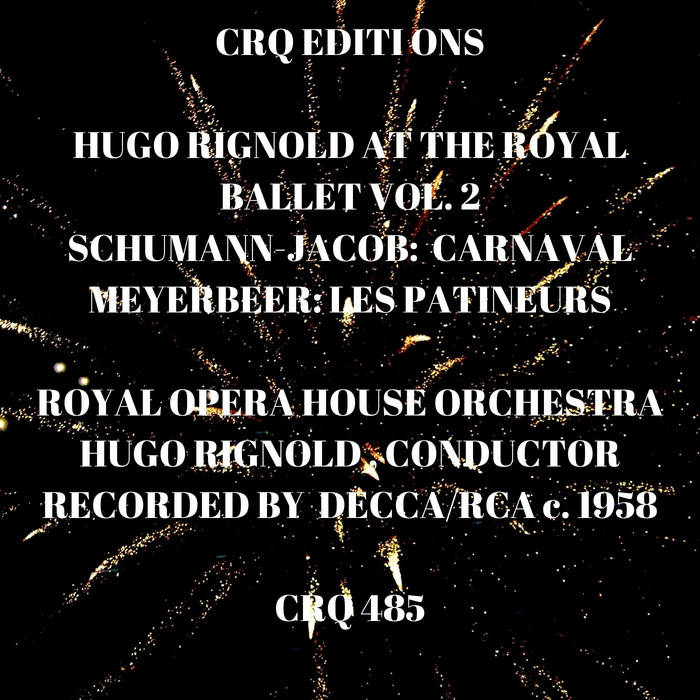 Originally recorded by Decca on behalf of RCA-Victor on 16th and 17th May 1958 at Walthamstow Town Hall.

from CRQ 485 HUGO RIGNOLD AT THE ROYAL BALLET VOL 2 1957​-​1960: SCHUMANN​-​JACOB: CARNAVAL; MEYERBEER​-​LAMBERT: LES PATINEURS, released October 18, 2021
The two releases CRQ 484 and 485 are of interest for several reasons.
Firstly, the role of the conductor in ballet is often under-appreciated, the focus naturally being upon the stage and the performers. Yet conducting ballet is a highly skilled art. Hugo Rignold, with his background as a jazz musician amongst other things, was clearly expert in delivering buoyant and rhythmically vigorous performances which must have been exhilarating in the theatre.
Secondly these two releases cast fresh light on Rignold's work as a ballet conductor with the United Kingdom's premier ballet company the Royal Ballet over the two periods with which he was associated with the company, 1947-1948 and 1957-1960.
Thirdly two of the works presented are arranged by Gordon Jacob: Mam'zelle Angot, and Carnaval. Jacob (1895-1984), a prolific composer and arranger, was a central figure in British music during his lifetime. Jacob's biography may be accessed at:
en.wikipedia.org/wiki/Gordon_Jacob
Fourthly the arrangement of Meyerbeer's music for Les Patineurs is by Constant Lambert, the founding conductor of the Royal Ballet and who would have been a colleague of Rignold up to Lambert's death in 1951.
Photographic transparencies of the production of Mam'zelle Angot at Covent Garden from the time of the production, with costumes and sets by André Derain, may be accessed at:
www.rohcollections.org.uk/relatedobjects.aspx?production=2423&collection=Frank%20Sharman%20Photographic%20Collection
An excellent biography of the British conductor Hugo Rignold (1905-1976) and survey of his recordings by Christopher Howell may be found at:
www.musicweb-international.com/classrev/2014/Mar14/Forgotten_Rignold.htm

If you like CRQ 485 HUGO RIGNOLD AT THE ROYAL BALLET VOL 2 1957-1960: SCHUMANN-JACOB: CARNAVAL; MEYERBEER-LAMBERT: LES PATINEURS, you may also like: