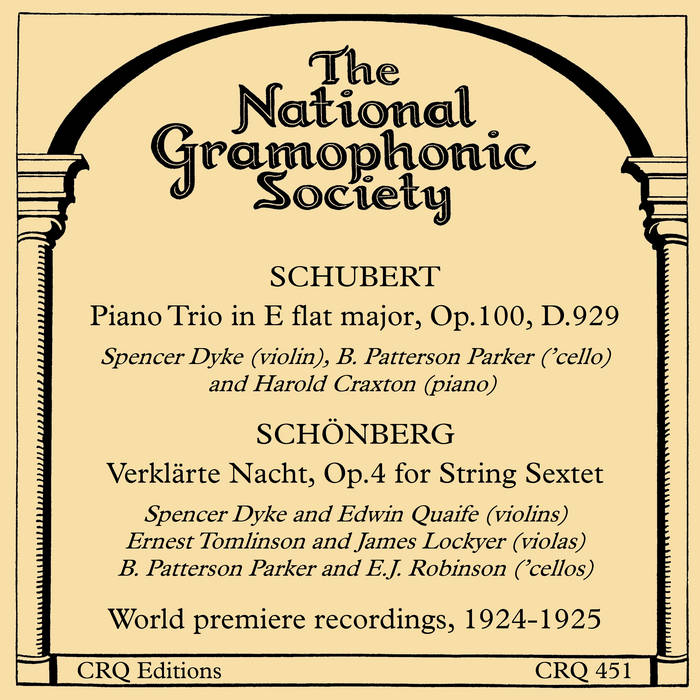 from CRQ 451 National Gramophonic Society world premiere recordings, 1924​-​1925: Schubert Piano Trio No. 2 Op. 100 D. 929, Schoenberg: Verklarte Nacht Op. 4; Spencer Dyke, Harold Craxton and others, released March 22, 2021
Harold Craxton (1885-1971)
One of twentieth-century Britain’s most revered piano teachers, Harold Craxton was also a composer, editor and recitalist (he and Spencer Dyke gave concerts together). Craxton recorded extensively with celebrity singers and instrumentalists – but relatively little large-scale music; this is his longest single set. As he wrote in The Gramophone, ‘The Trio of Schubert was a quite difficult piece of work to record, with its passages of great speed at the extreme ends of the piano compass, and its curious repeated note passages, so easy on the violin and ’cello, but so awkward on the keyboard. But with such masters of ensemble playing as Mr. Dyke and Mr. Parker, the task was lightened to a great degree’.

More information about Harold Craxton is available at:
www.craxtonmemorialtrust.org.uk

The National Gramophonic Society (1924-1935)
The NGS was an offshoot of The Gramophone, the magazine launched in 1923 by the British novelist Compton Mackenzie (see CRQ 447 for its first issue). Among several innovations, it was funded by subscription; its members voted on which works it would record; and it pledged to issue only premiere, complete recordings. Its second issue awkwardly coupled two long works on eight 78 rpm discs (the Schubert ends on one side and the Schoenberg starts on the other). James Lockyer, one of two players joining what was effectively the Spencer Dyke Quartet, had taken part in the London premieres of Verklärte Nacht in 1914. This NGS set was the first audio recording of any music by Schoenberg. Remarkably, the original string sextet version did not reappear on disc until the first LP recording in 1950. Now largely forgotten, the NGS’s pioneering productions have been newly transferred for CRQ Editions by Jolyon Hudson, with notes by Nick Morgan.

A complete discography of he National Gramophonic Society is available at:
nickmorgandiscography.org/index.php?title=National_Gramophonic_Society_discography